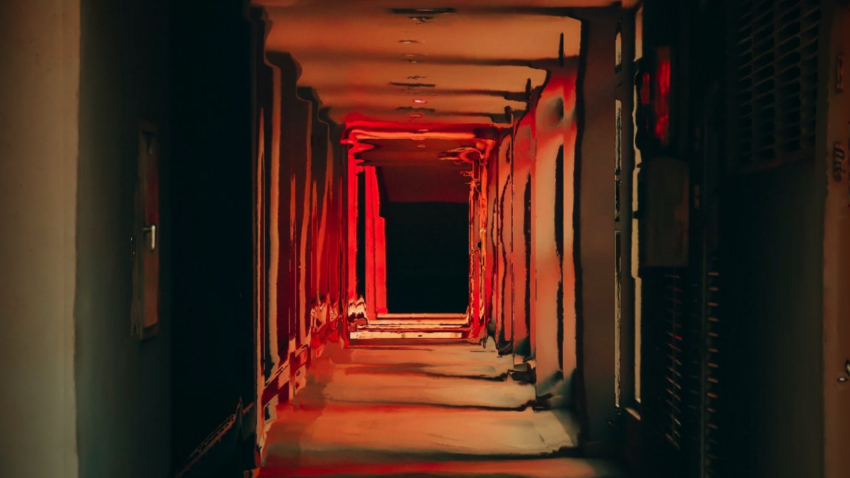 This story never happens to anyone we know. It’s something passed along, something heard by a friend of a friend. In most versions, it’s not something that happens here.

A woman stands at what she thought was her motel door and doesn’t recognize the number. At first, she brushes away the first tingle, light as a strand of spiderweb falling on her nape. All these motels look alike, she tells herself. They’re all cast from the same mold. She should know–they’ve switched between so many of them. For a moment, she almost believes she’s gotten confused and ended up at the place they’d stayed last week, or the week before.

She almost laughs it off as a mistake until she tries her key. It doesn’t fit the lock. She walks down the hallway, trying other doors but, one by one, none of the locks open, until she’s running, barely holding herself back from pounding her fists on every door, screaming the girl’s name.

The woman is not from around these parts, but if there is something she has learned it’s not to make a scene, not to call attention to herself. We don’t know her real name because of this. Might be why in some versions of the story, she’s “Marisol” and in others it’s “Maya”, but she never bothers to correct anyone and answers to whichever name she’s given.

She won’t mind if we call her “Maria”.

Maria left her home because of the vanishings. Anyone who protested the demolition of their neighborhood to make way for the seawall wasn’t seen again. Rumors spread as they always do–a friend of a friend saw unmarked vans rolling through the streets in the dead of night before someone vanished. The TV news never mentioned the vans, the epidemic of disappearances, the protests. Only the many jobs created by the building of the seawall were ever mentioned.

Even when her neighbors admitted what everyone knew but didn’t talk about, they were quick to add they never saw it themselves. It happened to someone who wasn’t close to them, something they’d heard second- or third-hand.

That was no way to live, much less a way to grow up. It was why she brought the girl with her.

Pulse hammering in her throat, she stares at the door. She squints at the wrong number, as if by an act of will she can make the lines run and squirm into the shape of the right number.

Only now does she notice the hallways are a different color. This time, it’s a light seafoam green, though in other versions of this story the hallway is powder blue or a deep yellow that reminds Maria of egg yolks. Thinking it’s just her hallway, she circles the entirety of the motel, passing the broken vending machine and dusty icemaker twice. Everything is painted the same color. The wrong color.

Where she was from, Maria wrote for a small paper and had a small apartment. Here, she works nights and moves around often, the better to avoid calling attention to herself. Between work and the motels, Maria’s days bleed into each other.

This has to be the place, but wouldn’t she have noticed the work crews putting down drop-cloths and taping the edges? Brushes and rollers?

In some versions of this story, Maria spends her nights serving watery beer to truckers and ranch-hands. Other times, she shaves meat off strung up carcasses until her hands ache.

When she returns to the motel and sees what’s happened, Maria seeks out an authority figure to help her. She doesn’t have a car and needs someone to drive her.

She tamps herself down, goes to the front desk. Maybe the clerk knows what’s happening, but his only response is the working of his throat. Maria knows she shouldn’t raise her voice, shouldn’t make a scene, but she can’t help imagining the girl sobbing and alone.

What she doesn’t dare mention is she’s heard the rumors. Children taken from their classrooms, never to return. So she’s never put the girl in school here, instead warning her to stay in their room while she works. Its four walls the only place the girl had ever known. Before leaving every night, Maria made sure the girl ate, bathed. She helped her into clothes handed down so many times their stitched logos had faded as much as the brands themselves. She’d brush the girl’s hair on the edge of the bed, her strokes often rushed–she couldn’t be late–but no matter how often the brush yanked at her tangles, the girl never complained. Maria let her watch TV but told her to keep the volume low. The last thing they needed was someone calling in a noise complaint that would lead to discovering the girl left alone, unsupervised.

Was this what had happened? Maria tries not to suspect the clerk, even if his silence hints at him knowing more than he lets on. She knows she’s making a scene, but wouldn’t any of us do the same? The clerk won’t say a thing about the situation, no matter how many times Maria repeats herself.

Maria needs to know what happened to her room. To the girl.

The clerk makes calming gestures, trying to tell her something in a halting voice. Then he points at his phone and pantomimes making a call. She doesn’t have time for this and needs to do something, anything, and she rushes back to the hallway–her hallway–as if she could ambush her room, find it before it can change again.

Maria knows her story is absurd, but she’s not crazy.

By the time the officer appears at the end of the hallway, she’s kicking the door that should be hers. Her throat is sore from shouting I’m NOT with every thud of her heel against the chipped paint. Maria turns to face him, dashing away useless tears. His hand rests on the butt of his weapon.

The officer tells her that if she doesn’t stop, he can’t help her. He offers a wavering smile and beckons with his free hand. He promises that if she comes with him, they’ll find the girl.

In some versions, Maria doesn’t trust him and runs, and at least one ends with the officer’s partner shooting her dead in the parking lot.

In most others, she lets them put her into their patrol car. The officers reassure her that they know where the girl is, and she goes along with it because what other choice does she have?

In precisely two other variations, Maria gets help in her search. In one, the officers don’t bother documenting anything and drive off down the highway. In the other, an everyday person intervenes before the officers can stuff Maria into their back seat, convincing the authorities to leave Maria with them. Together, they cruise down the highway, back to one of the previous motels where Maria and the girl had stayed. It’s open-ended, but we’re led to believe Maria is reunited with the girl–all the hints are there.

And so, the harrowing story ends on a more cheerful note.

It allows us to tut over the morning news, taking a bite of our buttered toast and telling each other how awful it all is, but see–? It’s for the best, after all.

It’s what cautionary tales do, is it not? This is a story of What Not To Do, and because we need to comfort ourselves rather than ask whether Maria did anything wrong, or–more importantly, could Maria have done anything right–we say:

If Maria hadn’t come here, none of this would have happened.

Maria and the girl don’t have names we can corroborate, and even if they did no one we know has seen this happen with their own eyes.

We could add to the list, but why be tedious and repeat what everyone already knows? It was enough to offer a fleeting glimpse of the hidden wheels turning to produce our comfort. We don’t need to know more about who fuels that machinery. Besides, even after everything Maria went through, it all turned out fine in the end.

All’s well that ends well, as they say.

But we know better than that, do we not?

Maria allows herself to be lowered into the back seat of the patrol car, and they drive off. At first, she’s sure they’re headed in the right direction. It isn’t until they drive past the fences she realizes their help wasn’t at all what she wanted. By the time they’re pulling her out, Maria resists, straining against them until they fall upon her. She curls in on herself, pleading, but it’s too late.

What we call the place they take her is not important–what we understand is Maria can’t leave. In a cruel twist, her new cell number is the same as that of her motel room. She’s found her missing room at last.

Maria is convinced they’ve brought the girl here too, and asks anyone who’ll listen if they’ve seen her. No one has.

This is the ending we know to be more true. No one believed Maria, if that was ever her name; no one found the girl in the end. We are shaken by this, angry. She fled the threat of vanishings only to think she was safe here and met this end. She never deserved any of this–none of us do.

But this is just some kind of urban legend–right?

Maybe, but we’ve all heard the rumors by now, and what are rumors if not a friend of a friend passing along a story about What Not To Do? No excuse for sinking back into that familiar complacency, for letting this go on. It’s what cautionary tales do, after all.

Karlo Yeager Rodriguez is originally from the enchanting island of Puerto Rico, but moved to the Baltimore area some years ago where he now lives with his wife and one odd dog. His fiction has appeared in Nature, Uncanny, Beneath Ceaseless Skies, and the Speculative Fiction for Dreamers anthology; his other writing can be found in Blood Knife. When not writing, Karlo hosts Podside Picnic, where he discusses the full spectrum of the literature of the fantastic, and has also narrated stories for Escape Pod, Pseudopod and Podcastle.